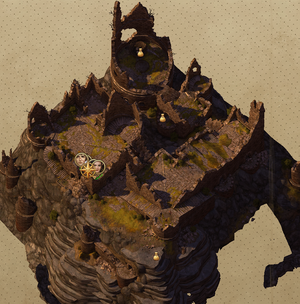 ''Known locally as Talon Peak, the jagged ruins of this crumbling tower sit on top of a low mountain, resembling a sharp claw protruding from the peak. The location is known mainly for the legends of giant birds nesting atop it.''

To find the Skullcrusher, you need to solve a little puzzle on the top level (with ruins). To begin with, you need to pass perception checks to find all four of the switches (look like bricks in the wall). First is in the most left tower remains (1 DC), second - a bit to the right from the first (1 DC), third - to the right from the second, just near the stairs, going top (1 DC), fourth - below all of them at the seemingly empty end of the stairs that go down (1 DC). Then you need to press the switches in correct order. Each correct pressing sounds like "Click!". If you hear a "Thud!" - start again from the beginning. The correct order (according to this description) is 2-4-1-3. This opens a hidden wall, behind which is a chest (Locked 7 DC). Inside it rests the Skullcrusher.