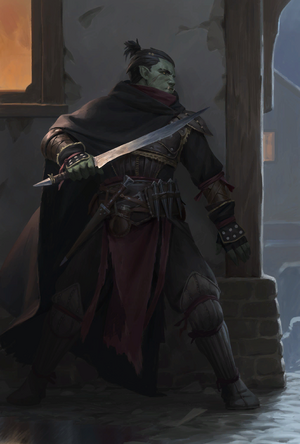 Rogue is a class in Pathfinder: Kingmaker. Life is an endless adventure for those who live by their wits. Ever just one step ahead of danger, rogues bank on their cunning, skill, and charm to bend fate to their favor. Never knowing what to expect, they prepare for everything, becoming masters of a wide variety of skills, training themselves to be adept manipulators, agile acrobats, shadowy stalkers, or masters of any of dozens of other professions or talents. Thieves and gamblers, fast talkers and diplomats, bandits and bounty hunters, and explorers and investigators all might be considered rogues, as well as countless other professions that rely upon wits, prowess, or luck. Although many rogues favor cities and the innumerable opportunities of civilization, some embrace lives on the road, journeying far, meeting exotic people, and facing fantastic danger in pursuit of equally fantastic riches. In the end, any who desire to shape their fates and live life on their own terms might come to be called rogues.

Role: Rogues excel at moving about unseen and catching foes unaware, but are also very skilled in finesse weapons making them formidable agile combatants. Their varied skills and abilities allow them to be highly versatile, with great variations in expertise existing between different rogues. Most, however, excel in overcoming hindrances of all types, from unlocking doors and disarming traps to outwitting magical hazards and conning dull-witted opponents.

Unchained:While much of the unchained rogue will be familiar to those who have played the original rogue, there are a number of new class features that greatly enhance the power and flexibility of the rogue. Chief among these is the debilitating injury class feature. A rogue with this ability can severely hamper her foes, giving her a much-needed boost to her offense or defense, depending on the situation. In addition, with finesse training, the rogue now gains Weapon Finesse for free at 1st level. This ability also lets her add her Dexterity to damage rolls with one weapon starting at 3rd level. Finally, the rogue's edge ability ties into a new system called skill unlocks. With this feature, the unchained rogue can master a small set of chosen skills, outperforming all those characters without access to such talents. (Note: This last feature does not appear to be implemented in the digital game.)

The rogue's attack deals extra damage anytime her target is flanked by her or her allies and anytime her target is Flat-Footed or in a similar state in which the target would be denied a Dexterity bonus to AC. This extra damage is 1d6 at 1st level, and increases by 1d6 every 2 rogue levels thereafter. Ranged attacks can count as sneak attacks only if the target is within 30 feet. This additional damage is precision damage and is not multiplied on a critical hit.

The rogue must be able to see the target well enough to pick out a vital spot and must be able to reach such a spot. A rogue cannot sneak attack while striking a creature with the total concealment condition.

These penalties do not stack with themselves, but additional attacks that deal sneak attack damage extend the duration by 1 round. A creature cannot suffer from more than one penalty from this ability at a time. If a new penalty is applied, the old penalty immediately ends. Any form of healing applied to a target suffering from one of these penalties also removes the penalty.

This defense denies another rogue the ability to sneak attack the character by flanking her, unless the attacker has at least four more rogue levels than the target does.

At 20th level, a rogue becomes incredibly deadly when dealing sneak attack damage. Each time the rogue deals sneak attack damage, she can choose one of the following three effects: the target can be put to sleep for 1d4 hours, paralyzed for 2d6 rounds, or slain. Regardless of the effect chosen, the target can attempt a Fortitude save to negate the additional effect. The DC of this save is equal to 10 + 1/2 the rogue's level + the rogue's Dexterity modifier. Once a creature has been the target of a master strike, regardless of whether or not the save is successful, that creature is immune to that rogue's master strike for 24 hours. Creatures that are immune to sneak attack damage are also immune to this ability.