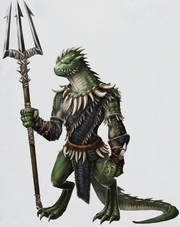 Lizardfolk, also called iruxi amongst themselves, are a culturally sophisticated, yet technologically primitive reptilian race of humanoids who dwell in many of Golarion's swamps and marshlands. They are an ancient species, and once could be found living throughout Avistan and Garund. The expansion of other humanoid races and changing climate has pushed them into the margins of the world over the past few millennia. Not a warlike race, they often find themselves pitted against land-hungry humans.