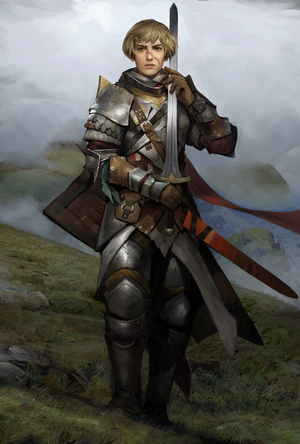 Human are one of the races available to the player in Pathfinder: Kingmaker.

Humans constitute the most populous race in and around Brevoy, as they do throughout Golarion. Ethnic Taldans make up well over half the region's human population; many trace their lineage back to the explorers and soldiers who first tamed the wild countryside ages ago. Descendants of Choral's conquering army possess strong Kellid bloodlines, as do the barbaric hordes of nearby Numeria. Spring and autumn bring fleets of Varisian flatboats to the Sellen's waterways as the nomadic people make their seasonal migration between the banks of Lake Encarthan and the Lake of Mists and Veils. Because of the region's penchant for attracting outsiders from around the world, Chelish, Keleshite, Tian, and Ulfen visitors commonly pass through or make new homes in the River Kingdoms’ many outcast sanctuaries.

The physical characteristics of humans are as varied as the world's climes. From the dark-skinned tribesmen of the southern continents to the pale and barbaric raiders of the northern lands, humans possess a wide variety of skin colors, body types, and facial features. Generally speaking, humans' skin color assumes a darker hue the closer to the equator they live. At the same time, bone structure, hair color and texture, eye color, and a host of facial and bodily phenotypic characteristics vary immensely from one locale to another. Cheekbones may be high or broad, noses aquiline or flat, and lips full or thin; eyes range wildly in hue, some deep set in their sockets, and others with full epicanthic folds. Appearance is hardly random, of course, and familial, tribal, or national commonalities often allow the knowledgeable to identify a human's place of origin on sight, or at least to hazard a good guess. Humans' origins are also indicated through their traditional styles of bodily decoration, not only in the clothing or jewelry worn, but also in elaborate hairstyles, piercing, tattooing, and even scarification.

Human society comprises a multitude of governments, attitudes, and lifestyles. Though the oldest human cultures trace their histories thousands of years into the past, when compared to the societies of other races like elves and dwarves, human society seems to be in a state of constant flux as empires fragment and new kingdoms subsume the old. In general, humans are known for their flexibility, ingenuity, and ambition. Other races sometimes envy humans their seemingly limitless adaptability, not so much biologically speaking but in their willingness to step beyond the known and press on to whatever might await them. While many or even most humans as individuals are content to stay within their comfortable routine, there is a dauntless spirit of discovery endemic to humans as a species that drives them in striving toward possibilities beyond every horizon.

Humans are fecund, and their drive and numbers often spur them into contact with other races during bouts of territorial expansion and colonization. In many cases, this tendency leads to violence and war, yet humans are also swift to forgive and forge alliances with races who do not try to match or exceed them in violence. Proud, sometimes to the point of arrogance, humans might look upon dwarves as miserly drunkards, elves as flighty fops, halflings as craven thieves, gnomes as twisted maniacs, and half-elves and half-orcs as embarrassments — but the race's diversity among its own members also makes many humans quite adept at accepting others for what they are. Humans may become so absorbed in their own affairs that they remain ignorant of the language and culture of others, and some take this ignorance to a hateful extreme of intolerance, oppression, and rarely even extermination of others they perceive as dangerous, strange, or "impure." Thankfully, while such incidents and movements may taint all of humanity in the eyes of some, they are more often the exception than the rule.

Humanity is perhaps the most diverse of all the common races, with a capacity for both great evil and boundless good. Some humans assemble into vast barbaric hordes, while others build sprawling cities that cover miles. Taken as a whole, most humans are neutral, yet they generally tend to congregate in nations and civilizations with specific alignments. Humans also have the widest range of gods and religions, lacking other races' ties to tradition and eager to turn to anyone offering them glory or protection.

Ambition alone drives countless humans, and for many, adventuring serves as a means to an end, whether it be wealth, acclaim, social status, or arcane knowledge. A few pursue adventuring careers simply for the thrill of danger. Humans hail from myriad regions and backgrounds, and as such can fill any role within an adventuring party.

Ability Score Racial Traits: Human characters gain a +2 racial bonus to one ability score of their choice at creation to represent their varied nature.

Size: Humans are Medium creatures and thus receive no bonuses or penalties due to their size.

Base Speed: Humans have a base speed of 30 feet.

Skilled: Humans gain an additional skill rank at first level and one additional rank whenever they gain a level.