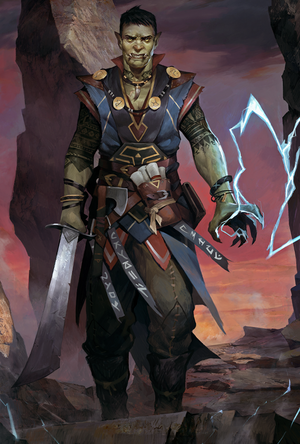 Half-Orc is one of the races available to the player in Pathfinder: Kingmaker.

Half-orcs get the worst of both worlds. Still, while not exactly accepted, half-orcs in civilized societies tend to be valued for their martial prowess. They are usually forced to grow up hard and fast, constantly fighting for protection or to make names for themselves. Feared, distrusted, and spat upon, half-orcs still consistently manage to surprise their detractors with great deeds and unexpected wisdom – though sometimes it's easier just to crack a few skulls.

Both genders of half-orcs stand between 6 and 7 feet tall, with powerful builds and greenish or grayish skin. Their canine teeth often grow long enough to protrude from their mouths, and these "tusks," combined with heavy brows and slightly pointed ears, give them their notoriously bestial appearance. While half-orcs may be impressive, few ever describe them as beautiful. Despite these obvious orc traits, half-orcs are as varied as their human parents.

Unlike half-elves, where at least part of society's discrimination is born out of jealousy or attraction, half-orcs get the worst of both worlds: physically weaker than their orc kin, they also tend to be feared or attacked outright by humans who don't bother making the distinction between full orcs and half-bloods. Even on the best of terms, half-orcs in civilized societies are not exactly accepted, and tend to be valued only for their physical abilities. On the other hand, orc leaders have been known to deliberately spawn half-orcs, as the half-breeds make up for their lack of physical strength with increased cunning and aggression, making them natural leaders and strategic advisors. Within orc tribes, half-orcs find themselves constantly striving to prove their worth in battle and with feats of strength. Half-orcs raised within orc tribes are more likely to file their tusks and cover themselves in tribal tattoos. Tribal leaders quietly recognize that half-orcs are often more clever than their orc cousins and often apprentice them to the tribe's shaman, where their cunning might eventually strengthen the tribe. Apprenticeship to a shaman is a brutal and often short-lived distinction, however, and those half-orcs who survive it either become influential in the tribe or are eventually driven to leave.

Half-orcs have a much more mixed experience in human society, where many cultures view them as little more than monsters. They often are unable even to get normal work, and are pressed into service in the military or sold into slavery. In these cultures, half-orcs often lead furtive lives, hiding their nature whenever possible. The dark underworld of society is often the most welcoming place, and many half-orcs wind up serving as enforcers for thieves guilds or other types of organized crime. Less commonly, human cities may allow half-orcs a more normal existence, even enabling them to develop small communities of their own. These communities are usually centered around the arena districts, the military, or mercenary organizations where their brute strength is valued, and their appearance is more likely to be overlooked. Even surrounded by their own kind, half-orc life isn't easy. Bullying and physical confrontation comes easy to a people who have been raised with few other examples of behavior. It is, however, one of the best places for young half-orcs to grow up without prejudice, and these small enclaves are one of the few places where half-orc marriages and children are truly accepted and sometimes cherished.

Even more rarely, certain human cultures come to embrace half-orcs for their strength. There are stories of places where people see half-orc children as a blessing and seek out half-orc or orc lovers. In these cultures, half-orcs lead lives not much different from full-blooded humans.

Elves and dwarves tend to be the least accepting of half-orcs, seeing in them too great a resemblance to their racial enemies, and other races aren't much more understanding. A lifetime of persecution leaves the average half-orc wary and quick to anger, yet people who break through his savage exterior might find a well-hidden core of empathy. Human societies with few orc problems tend to be the most accommodating, and half-orcs dwelling there can often find work as mercenaries and enforcers. Even in places where there is a general tolerance for half-orcs, however, many humans mistreat them when they can get away with it.

Half-orcs are envious of the measure of acceptance half-elves have within human and elven society and resent their physical beauty, which contrasts starkly to the half-orcs' brutish appearance. While half-orcs avoid antagonizing their half-breed cousins directly, they won't hesitate to undermine them if the opportunity presents itself.

Of all the other races, half-orcs are most sympathetic with halflings, who often have an equally rough lot in life. Half-orcs respect the halfling's ability to blend in and disappear and admire their perpetually cheerful outlook on life despite hardships. Halflings fail to appreciate this fact because they usually are too busy avoiding the large, intimidating half-orcs.

Forced to live either among brutish orcs or as lonely outcasts in civilized lands, most half-orcs are bitter, violent, and reclusive. Evil comes easily to them, but they are not evil by nature — rather, most half-orcs are chaotic neutral, having been taught by long experience that there's no point doing anything but that which directly benefits themselves. Half-orcs worship the human or orc gods venerated in the area where they were raised. Those who live alongside humans most often worship human gods of war, freedom, or destruction. Half-orcs raised in orc tribes find themselves most drawn to the gods of blood, fire, and iron — depending more on what god the tribe worships rather than the half-orcs' personal preference. Many half-orcs are contrary about religion, either ignoring it entirely, or getting deeply involved in it and trying to find meaning in a life filled with hate and misunderstanding; even a half-orc divine spellcaster may wrestle with doubt and anger about religion and faith.

Staunchly independent, many half-orcs take to lives of adventure out of necessity, seeking to escape their painful pasts or improve their lot through force of arms. Others, more optimistic or desperate for acceptance, take up the mantle of crusaders in order to prove their worth to the world. Half-orcs raised in orc societies often take up the brutish ways of those around them, becoming fighters, barbarians, or rangers. Half-orcs who survive their shaman training may eventually succeed their masters as tribal shamans, or flee the tribe and practice their magic as outcasts or explorers.

Half-orcs are just as likely to have children that possess an innate talent for sorcery as any other race, with the abyssal, destined, and elemental (fire) bloodlines being the most common types of sorcerers. Half-orcs are fascinated by alchemy, and its destructive capabilities make its usefulness obvious in any orc tribe. Half-orc alchemists treat themselves as living experiments, even to the point of trying to separate their orc and human halves through alchemy. Other alchemists use their powers to enhance their physical abilities and thus increase their status within orc communities.

In human societies, half-orcs have a few more options. Many find it easy to take advantage of the brute strength and work as mercenaries or caravan guards. Crime is another easy route for half-orcs, as there are plenty of criminals looking for a strong arm. Half-orc clerics in human communities are fairly rare; the more religious half-orcs more often turn to (or get pushed to) the martial aspects of religious service and become paladins or inquisitors. Half-orcs usually lack the patience and money required to become a wizard.

Type: Half-orcs are Humanoid creatures with both the human and orc subtypes.

Size: Half-orcs are Medium creatures and thus have no bonuses or penalties due to their size.

Base Speed: Half-orcs have a base speed of 30 feet.

Skilled: Half-orcs gain an additional skill rank at first level and one additional rank whenever they gain a level.

Intimidating: Half-orcs receive a +2 racial bonus on intimidate due to their fearsome nature.

Orc Weapon Familiarity: Half-orcs are proficient with greataxes and falchions and treat any weapon with the word "orc" in its name as a martial weapon.

Orc Ferocity: When a half-orc is brought below 0 hit points but not killed, he can fight on for 1 more round as if disabled. At the end of his next turn, unless brought to above 0 hit points, he immediately falls unconscious.