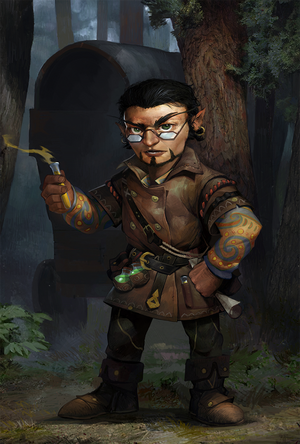 Gnome are one of the races available to the player in Pathfinder: Kingmaker.

The boundaries between Golarion and the First World are not constant; in some places, like in the Sellen River basin, these barriers are unusually thin. The barriers thin yet further, rumors hold, in the Stolen Lands—and certainly fey are a powerful force in the region. Many believe that the influence of the First World over the Stolen Lands is the primary reason none have managed to tame the wilderness. Regions like these have long drawn gnomes to their proximity, and tales of gnome expeditions to explore the Stolen Lands are quite common—as are tales of expeditions that become lost and are never heard from again. Optimistic gnomes cling to these vanishings as proof that the Stolen Lands hide pathways into the First World. Gnomes have a strong presence in the River Kingdoms and have established communities there, such as Thom and Artume. Enclaves of less civilized gnomes exist in Echo Wood near the Numerian border, Embeth Forest, and Brevoy's Gronzi Forest, though these shamanistic sects tend to keep mostly to themselves. Full of interesting sights and new experiences, the region presents a perfect spectacle for gnomes who enjoy the variety of people and places that can be found there.

Gnomes are one of the smallest of the common races, generally standing just over 3 feet in height. Despite their small frames, however, gnomes are extremely resilient, and not as weak as many of their foes assume. Though their diminutive stature reduces their ability to move quickly, gnomes often train to take advantage of their size, especially when fighting foes much larger than themselves.

The coloration of gnomes varies so wildly that many outsiders assume gnomes commonly use dyes and illusions to change their skin and hair tones. While gnomes are certainly not above cosmetic enhancement (and may wish to change their appearance just to see how outlandish they can look), their natural hues truly range over a rainbow of coloration. Their hair tends toward vibrant colors such as the fiery orange of autumn leaves, the verdant green of forests at springtime, or the deep reds and purples of wildflowers in bloom. Similarly, their flesh tones range from earthy browns to floral pinks, and gnomes with black, pastel blue, or even green skin are not unknown. Gnomes' coloration has little regard for heredity, with the color of a gnome's parents and other kin having no apparent bearing on the gnome's appearance.

Gnomes possess highly mutable facial characteristics, and their proportions often don't match the norm of other humanoid races. Many have overly large mouths and eyes, an effect which can be both disturbing and stunning, depending on the individual. Others may have extremely small features spread over an otherwise blank expanse of face, or may mix shockingly large eyes with a tiny, pursed mouth and a pert button of a nose. Gnomes rarely take pride in or show embarrassment about their features, but members of other races often fixate on a gnome's most prominent feature and attempt to use it as the focus of insults or endearments.

Unlike most races, gnomes do not generally organize themselves within classic societal structures. Gnome cities are unusual and gnome kingdoms almost unknown. Further, gnomes have no particular tendency to gather in specific neighborhoods even when a large number of them live among other races. While specific laws meant to contain the potential impact of gnomes on a society may require a "gnome quarter," and societal pressure sometimes causes all non-gnomes to move away from areas with high gnome populations, left to their own devices, gnomes tend to spread evenly throughout communities that allow them.

However, even when gnomes are common within a community as a group, individual gnomes tend to be always on the move. Whimsical creatures at heart, they typically travel alone or with temporary companions, ever seeking new and more exciting experiences. They rarely form enduring relationships among themselves or with members of other races, instead pursuing crafts, professions, or collections with a passion that borders on zealotry. If a gnome does settle in an area or stay with a group for a longer period, it is almost always the result of some benefit that area gives to a vocation or obsession to which the gnome had dedicated himself.

Despite their extremely varied backgrounds and lack of a unifying homeland, gnomes do possess some common cultural traits. Male gnomes have a strange fondness for unusual hats and headgear, often wearing the most expensive and ostentatious head-covering they can afford (and that their chosen careers will allow them to wear without causing problems). Females rarely cover their heads, but proudly wear elaborate and eccentric hairstyles that often include intricate jeweled combs and headpieces.

Gnomes have difficulty interacting with the other races, on both emotional and physical levels. In many ways, the very fact other races see gnomes as odd is itself the thing gnomes find most odd about other races, and this leads to a strong lack of common ground upon which understanding, and relationships can be built. When two gnomes encounter one another, they generally assume some mutually beneficial arrangement can be reached, no matter how different their beliefs and traditions may be. Even if this turns out not to be the case, the gnomes continue to look for commonalities in their dealings with each other. The inability or unwillingness of members of other races to make the same effort when dealing with gnomes is both frustrating and confusing to most gnomes.

In many ways, it is gnomes' strong connection to a wide range of apparently unconnected ideas that makes it difficult for other races to build relationships with them. Gnome humor, for example, is often focused on physical pranks, nonsensical rhyming nicknames, and efforts to convince others of outrageous lies that strain all credibility. Gnomes find such efforts hysterically funny, but their pranks often come across as malicious or senseless to other races, while gnomes, in turn, tend to think of the taller races as dull and lumbering giants.

Gnomes get along reasonably well with halflings and humans, who at least have some traditions of bizarre, gnomelike humor. Gnomes generally feel dwarves and half-orcs need to lighten up, and attempt to bring levity into their lives with tricks, jokes, and outrageous tales the more dour races simply cannot see the sense of. Gnomes respect elves, but often grow frustrated with the slow pace at which members of the long-lived race make decisions. To gnomes, action is always better than inaction, and many gnomes carry several highly involved projects with them at all times to keep themselves entertained during rest periods.

Although gnomes are impulsive tricksters, with sometimes inscrutable motives and equally confusing methods, their hearts are generally in the right place. What may seem a malicious act to a non-gnome is more likely an effort to introduce new acquaintances to new experiences, however unpleasant the experiences may be. Gnomes are prone to powerful fits of emotion, and find themselves most at peace within the natural world.

Gnomes' propensity for wanderlust, deep curiosity, and desire to master odd or esoteric skills and languages make them natural adventurers. They often become wanderers to experience new aspects of life, for nothing is as novel as the uncounted dangers facing adventurers. Many gnomes see adventuring as the only worthwhile purpose in life, and seek out adventures for no other motive than to experience them. Other gnomes desire to find some lost lore or material that has ties to their chosen vocation and believe only dragon hoards and ancient ruins can contain the lore they need, which can result in gnomes who think of themselves as bakers or weavers being just as accomplished adventurers as those who declare themselves to be mages or scouts.

Gnomes are physically weak compared to many races, and see this as a simple fact of life to be planned for accordingly. Most adventuring gnomes make up for their weakness with a proclivity for sorcery or bardic music, while others turn to alchemy or exotic weapons to grant them an edge in conflicts.

The Bleaching is the name given to the physical decolorization and aging of a gnome, and is caused by a lack of exposure to new and exciting experiences. This bleaching of color is accompanied by a psychological decline first into depression and apathy, and eventually into madness and death. Gnome efforts to fend off the Bleaching only serve to fuel their racial curiosity and whimsy, giving it somewhat of a manic edge. Some claim that the Bleaching is a result of the gnomes' leaving the First World thousands of years ago. Rare gnomes survive the Bleaching, and develop an enigmatic wisdom and connection to the natural world, earning them the name, "bleachlings."