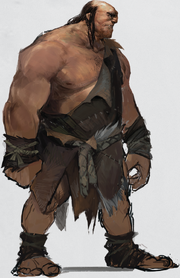 Giant is the name given to a large number of over-sized humanoids living on Golarion.

All giants share one common trait: massive humanoid forms. They often range from 12 to 40 feet tall and measure their weight in tons.

There are many forms of giant on Golarion broadly classifiable into two categories: true giants and giantkin. True giants are sometimes referred to as giantkind.

Though potentially able to speak many languages, giants also have a common language known simply as Giant. The language of the giants that exists today is a mixture of Cyclops and Thassilonian. First used by the giant slaves of the runelords in the time before Earthfall, it spread to the rest of Golarion after the destruction of that realm.